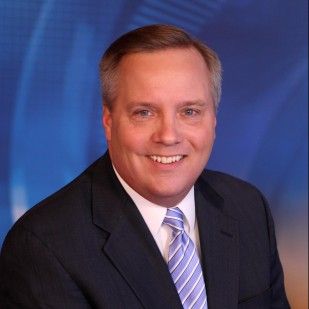 Jim and Denise Hnytka co-anchor “News 8 at 5”, “News 8 at 6”, and “News 8 at 10” each weekday with Chief Meteorologist James Zahara and Sports Director Matt Randazzo.

He’s the moderator of “News 8: This Week with Jim Mertens” Sunday mornings on WQAD.

Jim was the co-anchor of “Good Morning Quad Cities” with Julie Sisk for nine years starting in 2006. Before coming to mornings, Jim was the anchor and producer of “News 8 at 6:30” and a reporter for “News 8 at 10”. He’s also anchored the weekend broadcasts and was a reporter on the streets since he joined the WQAD News 8 team in 1995.

Jim is also the host of “The Cities”, a weekly half-hour public affairs program seen on WQPT-TV, the Quad Cities PBS station.

He got his start in radio in 1978 at WFON-FM in Fond du Lac, Wisconsin. He later joined WAXX/WAYY Radio Stations in Eau Claire, Wisconsin where he would start as an overnight Country music announcer before working in the station’s radio news department as a reporter and anchor.

Jim is a graduate of the University of Wisconsin-Eau Claire School of Journalism. He’s received numerous reporting awards from Iowa, Illinois, Wisconsin and Michigan. His long-form reporting earned him first place awards with the Iowa Associated Press, the Iowa Broadcast News Association, and the Illinois News Broadcasters Association.