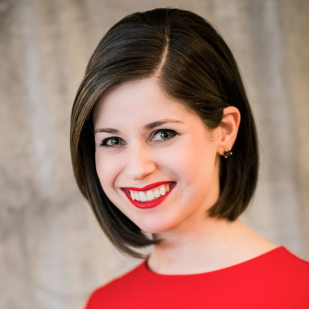 Angie Sharp is the Co-Anchor of “Good Morning Quad Cites.” You can watch her, alongside Jonathan Ketz and Storm Track 8 Meteorologist Eric Sorensen, Mondays through Fridays from 4:30am-7am as well as at 11am.

However, Angie’s earliest memory of the Quad Cities was riding with her dad in a convertible when he was the Grand Marshal in Augustana College’s 1990 Homecoming Parade.

18 years later, Angie graduated from Augustana College with a Bachelor’s Degree in Speech Communication and English with an Emphasis in Writing. During her time as a Viking, Angie became an Intern at WQAD. Through shadowing reporters, helping producers, and working with photographers, Angie quickly found a passion for telling the stories of her community.

In August 2008, Angie began her career in Journalism as a Photojournalist with WHBF in Rock Island. In November 2009, she found her way back to WQAD as a Producer and Reporter for “Good Morning Quad Cities.” In October 2010, Angie was taken off the graveyard shift and began reporting full-time for WQAD. In May 2013, Angie became the Weekend Anchor for WQAD and in January 2016, she helped launch News 8 at 9pm on WQAD’s Sub-Channel My TV 8.3. In September 2016, Angie returned to “Good Morning Quad Cities” to Co-Anchor with Jonathan Ketz and Storm Track 8 Meteorologist Eric Sorensen.

Angie loves living in the Quad Cities. Her favorite events include the John Deere Classic, the Go Red for Women Movement, the Red Cross’ A Taste on the River, Festival of Trees, BIX, the St. Patrick’s Day Parade, Boo at the Zoo, any Quad Cities River Bandits Game, and of course… Red, White, and BOOM! A week would not be complete for Angie without a trip to Whitey’s Ice Cream, eating/drinking/shopping local, and a nice long walk along the Mighty Mississippi with her dog, Zuno.

Angie went from “Mitchum” to “Sharp” in August 2012, when she was married at Short Hills Country Club in East Moline. She currently lives with her husband, Zach Sharp – an Engineer at John Deere – in Moline.

Angie is proud to be part of an incredible team at WQAD and looks forward to meeting you… whether it’s when she’s out covering the stories of the day, getting groceries at HyVee, or grabbing items for “Nailed It Or Failed It” at Hobby Lobby!