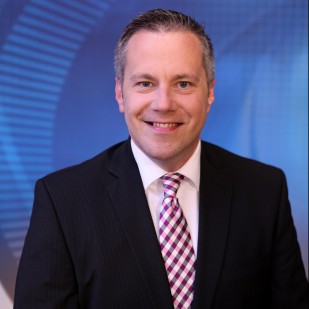 Eric brings two decades on air experience to WQAD News 8. He has received two Silver Dome Awards by the Illinois Broadcasters Association for excellence in weather coverage and breaking news and has been nominated three times for Emmy awards in weather achievement, breaking news, and environmental reporting. In 2018, he became a fellow of the Society of Environmental Journalists.

While forecasting the weather is his life’s passion, getting out into the community is what keeps him going. He has spoken to more than 15,000 students about weather in his career, and is proud to be a board member of Clock, Inc., the Quad Cities’ LGBTQ resource center.

In 2008, he led a relief effort for devastating flooding in Iowa. He and his brother Mike coordinated private pilots who delivered donated food and supplies via airplane from Rockford to Cedar Rapids (since all of the highway links were closed).

When he’s not at work, look for him kayaking area lakes and rivers. At home, Eric spends his time spoiling his black lab, Oliver. He’s also fanatical about trains, planes, cars, and the Green Bay Packers.